You might not realize it, but you’re using an HMI right now.

An HMI, or Human-Machine Interface, is a user interface or dashboard that connects a person to a machine, system, or device. Although the term can be for any device with a screen in which a user can interact with, it’s typically used in the context of an industrial process.

HMIs have been around for decades, and are responsible for a lot of today’s technological advancement.

HMIs are used to:

“Input” is when a user needs to tell the machine what to do. The user might use keyboards, touchscreens, joysticks, or mice.

“Output” allows the machine to keep the user updated on commands, which can be seen through a computer screen or by machine activity.

Let’s say that it’s a hot summer day and you want to turn on your air conditioner. To do so, you have to interact with your air conditioner’s interface by pressing buttons to turn it on, choose the temperature, and the speed. Those options are considered the HMI, which allow you to communicate to the system inside of the machine.

Another example of an HMI is an ATM. You must press buttons that prompt the machine to access your bank account, read your balance, and withdraw a specific amount of money. 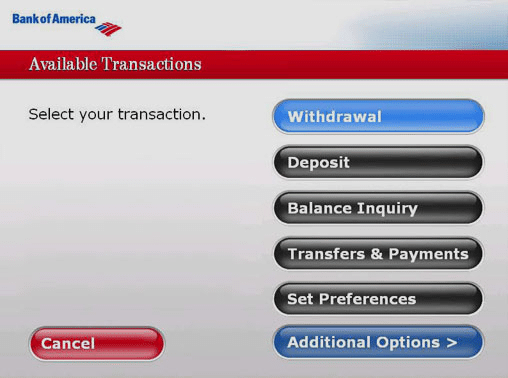 The buttons and touchscreen are examples of HMI which help you tell the machine what you’d like to do.

Evolution of the Human-Machine Interface

HMIs are a significant way that humans interact with machines. They’re used daily with our computers and smartphones, but they’re also used in business and industrial settings for mass production. 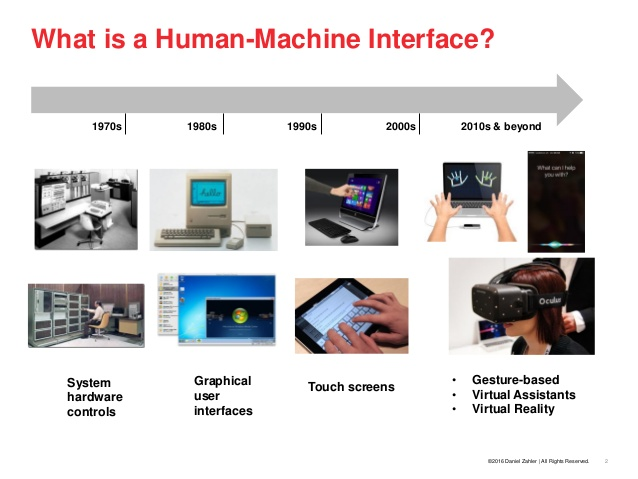 But before we had the touchscreens we know today, only buttons were used to communicate with a machine. It’s important to understand this history when you’re considering whether to modernize a workplace.

People love technology — there’s no doubt about it. As a society, we’ve had a specific love for digital technology over the past few decades, finding ways to improve it and make it more beneficial to everyday life. But before touchscreens were a thing, interacting with machines required a bit more work and patience. It all started with push buttons that controlled things like lights, lights, dials, and gauges.

“It wasn’t all that functional,” says engineer Tim Stone. “But it served a purpose, which was, ‘I’m going to get to the next level of controlling a manufacturing process by having something that I can look at and respond to.’”

In the 1980s, early HMI electronic panels extended backlight life and increased brightness for visibility, but due to the high cost, most manufacturers opted to keep push-button devices.

It was when the personal computer, PCs, were introduced that HMIs started seeing a digital revolution along with the rest of the world.

Thanks to the PC, liquid-crystal display (LCD) screens came into the picture, swiftly replacing CRTs, or cathode ray tubes. These were the less-detailed, rounded, and thicker screens used for all types of HMIs.

But everybody wanted the LCD screens — they were much savvier. They were also smaller, lighter, required less power, and created more detailed images on-screen. 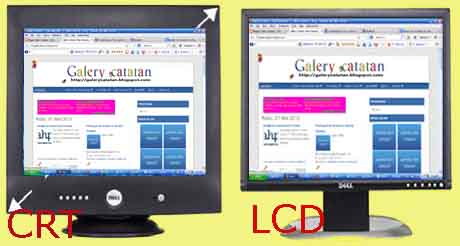 “The late 1990s also saw the introduction of new hardware — LCDs instead of CRTs, intrinsically safe touchscreens,” says Louis Szabo, a business development manager. “But when manufacturers talk about HMIs now, they talk about software. That’s where and when changes really began.”

These types of screens allowed for the development of touchscreen devices. Touchscreen technologies developed as compatible with LCD software, making handheld devices and advanced-interactive technology possible in the 2000s.

Everybody ditched their flip phone when the smartphone entered the market. They had a touchscreen, looked sleek, had access to the Internet, and made communication much more accessible than ever.

It wasn’t long until tablets, touchscreen laptops, digital laptops, smartboards, and smart televisions became popular, too. In short order, these innovations made it into the business world.

Today: The Future of HMIs

With AI, we can have virtual assistants who learn from the user’s behavior, whereas previously our computer software had limited functionality. Now, we have streaming services and smart devices right at our fingertips. 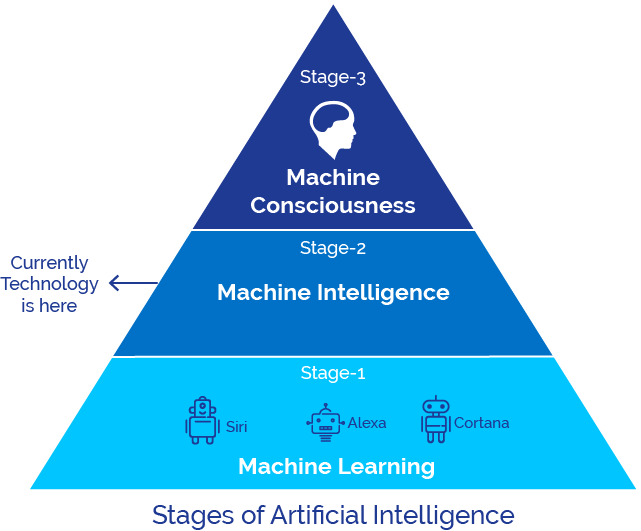 As AI progresses, HMIs only become more accessible and “smarter.” Theorists believe that AI has three stages, which are:

Additionally, we are revolutionizing the way we play games and train new workforces through VR and AR. Thanks to equipment like the Samsung Gear VR, Vrse Works, and the Oculus Rift, users can slip on a pair of goggles and interact with an imagined world.

How Are HMIs Used?

An excellent human-machine interface should serve as a time-saving, functional purpose. They are intended to increase productivity, increase uptime, and provide consistent product quality. Because of this, HMIs are used in all types of industries, such as:

HMIs in the Workplace

HMIs are everywhere, and they’re not going anywhere anytime soon. Although we use HMIs on our smartphones and laptop computers, business and industrial workplaces rely on HMIs for efficient communication, productivity, preventing errors, and recording data.

If you walk into a business office, you’ll notice immediately that almost everybody is at a computer. It’s likely that everybody in the office is communicating this way — whether it’s via memos, emails, or instant messaging. It’s also common to see manufacturers and production warehouses with HMIs that increase communication within an organization.

Just because a person can perform something manually doesn’t mean it’s the best idea — after all, machines are faster. HMIs help machines produce more work in less time, improving productivity and efficiency.

Instead of manually operating a machine, workers can use the machine’s functions through touchscreens (HMIs). This also makes for less risk of injury and happier workers.

HMIs are known for their ability to record data, which is ideal in industrial settings. By entering commands into an HMI, the corresponding system can record the information. It can be used later for other purposes, such as troubleshooting and adjusting settings.

Using an HMI like a computer also allows for businesses to communicate effectively with customers and clients. For manufacturing companies, customers can place orders online. The processor transmits the order data to the warehouse, allowing for quicker order placement and shipping.

Human-machine interfaces are continually developing. Evolving from the push of a button, HMIs are used to enhance our daily lives, so tasks become practically effortless.

And as we’ve seen through impressive technology like AI and VR, the future of HMIs is limitless. 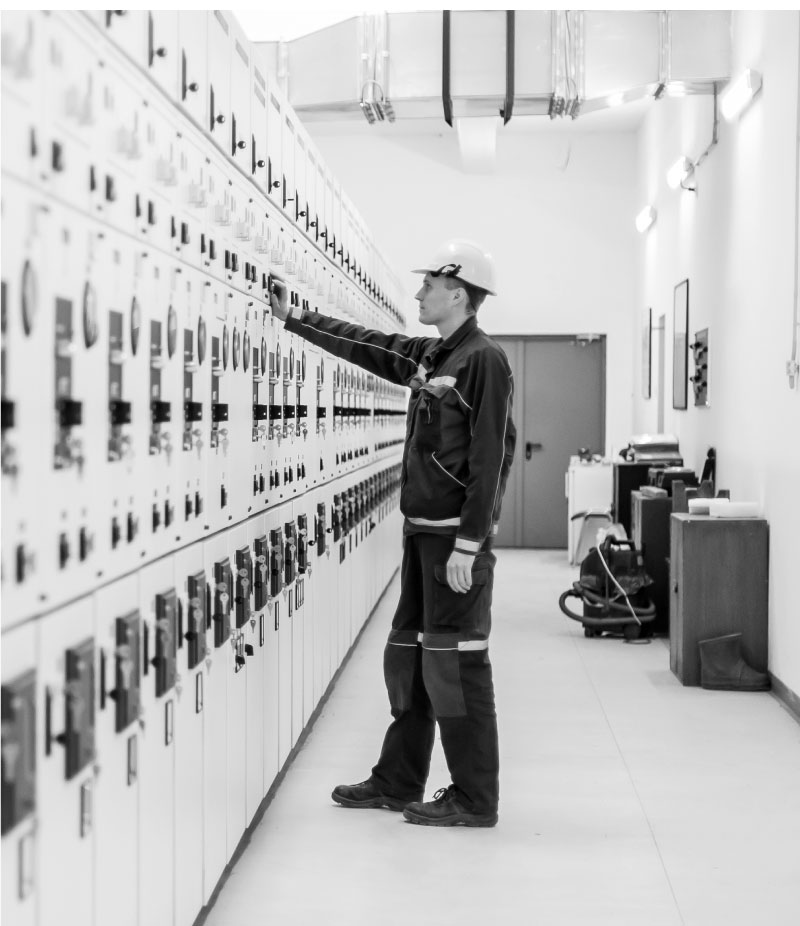